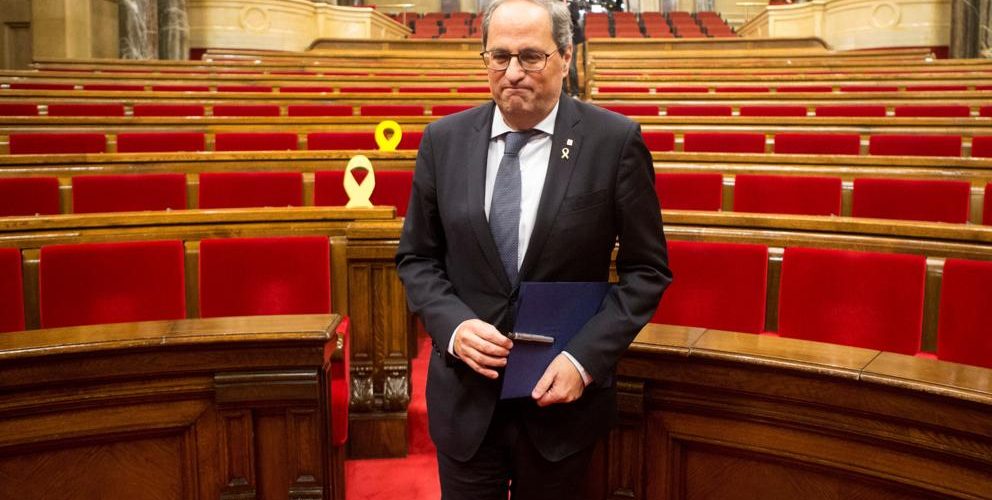 Add comment
7 views
4 min read
Add comment
Home » Content » The tangled disabling of Catalan premier Torra
Facebook Twitter Reddit Pinterest Email LinkedIN WhatsApp
The first is that we live under a legal system, that we owe respect to it, and that when it is disobeyed on purpose, we must fight with the consequences. Torra chose to disobey, following the confrontational policy so appealing to JxCat. Now, as a member of the structure of a State that includes the Generalitat, it can only assume the effects of its acts.

While Catalonia begins to calculate the extraordinary costs of the Gloria storm, the president of the Generalitat, Quim Torra, is immersed in a lost political battle, which will inexorably end sooner or later with his disqualification.

This battle derives from the disobedience of Torra, embodied in his refusal to withdraw from the balcony of the Palau de la Generalitat, despite previous warnings and in full election campaign, a banner supporting political prisoners who was considered partisan. That attitude earned him a sentence of disqualification of eighteen months issued by the Superior Court of Justice of Catalonia, against which Torra announced an appeal in the Criminal Chamber of the Supreme Court, of not immediate resolution. Perhaps to reinforce or energize it, PP, Ciudadanos and Vox went to the Provincial Electoral Board of Barcelona, ​​demanding that the deputy minutes be withdrawn from Torra. Said Board ruled that Torra could continue to be a deputy while there was no firm resolution of the Supreme Court, which is why the said parties went to the Central Electoral Board (JEC), which finally decided to cancel Torra’s credential in the Parliament. This decision was corroborated by the Supreme Court, specifically by another of its rooms, that of the Administrative Litigation.

Such decisions encouraged Torra to get tough and affirm that the JEC, whose rationale is focused on electoral processes, was not competent in the matter. Also to challenge the State, saying that the decision of its withdrawal competed only to the Parliament. And, incidentally, to seize the occasion to transform it into a new battle in the war that confronts the two members of the Government in the old days. That is, his group JxCat, and ERC. How? Well, trying to pass the ball to republican Roger Torrent, president of the Parliament: the Provincial Electoral Board of Barcelona on Thursday gave 48 hours to the Catalan Chamber to communicate the name of who will occupy the premier Torra seat. And if the Chamber, through its authorized officials, does not do so in the plenary session on Monday, the political responsibility may fall on republican Torrent, its highest authority, which could thus incur disobedience, expose itself to its effects and, de facto, follow the contempt policy in which Torra once ventured.

The first is that we live under a legal system, that we owe respect to it, and that when it is disobeyed on purpose, we must fight with the consequences. Torra chose to disobey, following the confrontational policy so appealing to JxCat. Now, as a member of the structure of a State that includes the Generalitat, it can only assume the effects of its acts.

The second idea is related to the role of the judiciary. On the one hand, there are few who believe that the Electoral Board could have overreached. On the other, it is surprising that two Supreme Court rooms are involved in the same issue of disabling Torra. There is a risk that they end up expressing themselves in a mismatched manner. And that would not contribute to restoring the prestige, already eroded, of Spanish justice.

The third idea concerns the independent, insufficient and divided majority, in addition to being locked in a petty and awkward dispute over the birthright, which JxCat and ERC often highlight, never ceasing to sigh for their unity.

The fourth idea associated with this judicial political entanglement leads us to reiterate our conviction that the judicialization of politics and the politicization of justice constitute, especially in its current advanced phase, a major error and a major obstacle to the correct daily management of the public thing.

Catalan Government Institution has lost its brand. It suffers, more deeply and with a worse diagnosis, a reputation crisis