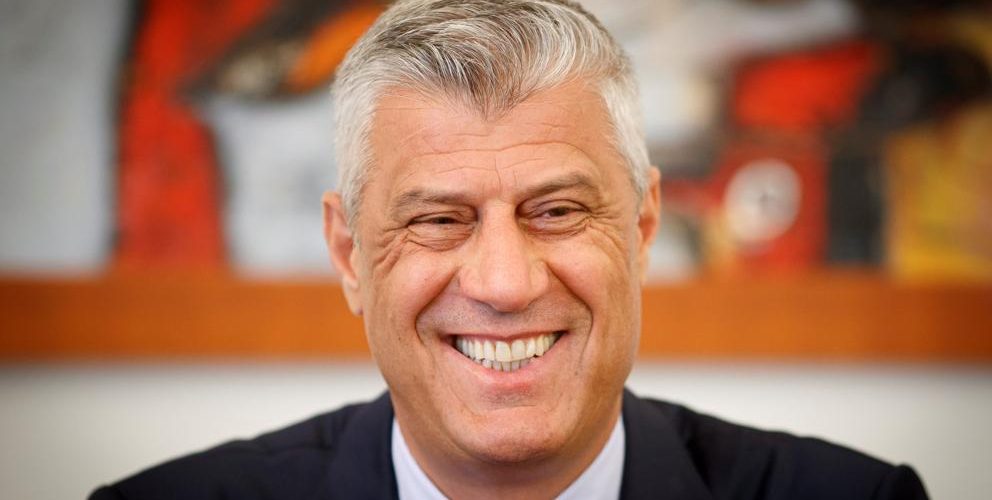 Hashim Thaci: “Spain is not Serbia and Catalonia is not Kosovo”

Hashim Thaci (1968), the young political leader of the Kosovo Liberation Army in 1999 and today the president of the Balkan country, celebrated on Wednesday the 20th anniversary of the end of the war with Bill Clinton, Madeleine Albraight and General Wesley Clark. In an interview for La Vanguardia.com and the agency Efe, he maintains his positions before the next meeting with the Serbian president, Alexander Vucic, scheduled for July 1 in Paris.

The Deputy Assistant Secretary of State of the USA, Matthew Palmer, has insisted these days that you must lift the 100% tariffs with Serbia because they hinder a negotiation, not only with Serbia but with the EU, and he has insisted that there will be no better time than the current one to negotiate…

The dialogue between Kosovo and Serbia must continue unconditionally on the part of Serbia because a dialogue really makes sense when it is not conditioned by any part. This dialogue should not be hindered by anyone. Tariffs are a decision of a sovereign State, they are fair, legitimate and will not be canceled and must be respected. These tariffs should not serve as a justification for Serbia not to participate, because only through dialogue can a final Kosovo-Serbia agreement of reciprocal recognition, a legally binding agreement, and an agreement that closes all pending issues between Kosovo and Serbia be achieved. Now is the time for the EU to act in a unified and coordinated way with the United States to complete this process this year. We are working for the internal and international consolidation of our country. Our goal is to be part of NATO and the EU and have special relations with the United States. We do not want changes of the borders, but the opening according to the European model, a model with open borders under the Euro-Atlantic umbrella. We are not going to fall into the trap of Serbia talking about Greater Albania or Greater Kosovo. Kosovo is a sovereign country.

You have spoken of an agreement with Serbia “all included”. What does it mean?

Only an inclusive agreement Kosovo-Serbia makes sense to close all open issues, including economic development, education, health, culture, cultural heritage, more affirmative respect for minorities including the document of Martti Ahtisaari. Kosovo is the homeland of all its citizens, not only of the Albanians, but also of the Serbs, Montenegrins, etc. The process of dialogue must end with the mutual recognition and entry of Kosovo into the UN organization. I am in favor of the opening of the borders, and not of the change of borders, because the exchange is bargaining and I do not bargain the territory of my country. I insist, we must work according to standard values ​​and European visions. But my dream and vision are the European model without borders, with open borders, that of a multi-ethnic and integrated society.

That idea was not mine, it was a vision of the skeptics and critics. We talk about European standards, standards that fit with the citizens of Kosovo. My idea is to have a European model with open borders, in which a multi-ethnic and integrated society lives.

You are creating an army. Is it because your priority is entering NATO?

We are very proud to create it. It is definitely our right as a sovereign and independent country to form an army and be a member of NATO. It is a multiethnic and very professional army. More than 10% of the Army is made up of minorities, 5% of which is Serbian. After the entry of Albania and Macedonia of the North it is the turn of Kosovo to be part of NATO. It is a symbolic force, but it will get 8,000. It is a new, modern Army, according to NATO standards. Aggression is not our goal. The Army will invest in peace, in local, regional and global stability. We are currently participating in some peace and humanitarian missions outside the country.

Why a Spanish government should risk recognizing Kosovo, taking into account the issue of Catalonia?

First of all I would like to thank the government and the Spanish people for their solidarity demonstrated in the times of the crisis and ethnic cleansing during the years 1998-1999. Spain has been part of the bombing of NATO and KFOR during the establishment of peace in Kosovo. Spanish women and men, military and civilians have done marvelous work in Kosovo during these 20 years in international missions. I visited Madrid in 2017, before the proclamation of independence and at that time the Spanish government has approved, saluted and supported the Ahtisaari document on which we have declared the independence of Kosovo. I believe that Spain has done an excellent job for Kosovo and I am very grateful to it on behalf of the Kosovar institutions. But of course we demand the recognition of Spain because the arguments used by the United States and other EU countries that recognized Kosovo are the same also for Spain. The case of Kosovo is special. In Kosovo, ethnic cleansing and genocide by the State of Slobodan Milosevic has occurred. We have fought a battle for existence. The intervention of NATO has been a humanitarian intervention to protect the civilian population. Spain is not Serbia, it is not governed by a Slobodan Milosevic, and neither is Catalonia Kosovo.

Is that your answer to the Catalan politicians who compare Catalonia with Slovenia and Kosovo?

It is an invitation of mine to Spain to recognize Kosovo, to look at the positive arguments and not to the difficulties. Miguel Ángel Moratinos at that time asked me to postpone the declaration of independence for a few days while he did not reject the arguments of independence. We respect Spain and the Spanish people. We are friends.

How important would Spanish recognition be to countries that have not done so, Romania, Greece, Cyprus and Slovakia?

If Spain would recognize Kosovo, new recognitions would happen. In any circumstance, we love and respect Spain. We will be together de jure part of the same family, of NATO and of the EU.

Catalan socialist leader Iceta to Premier Torra “Nobody is above the law. The process has been a big lie. Call for elections.”