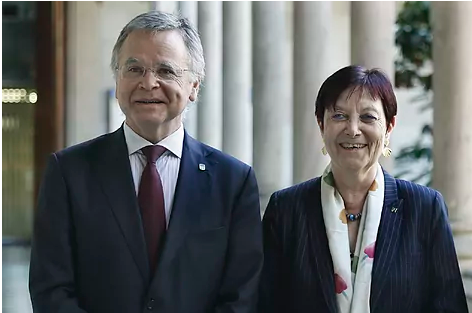 Catalan university Rectors against separatism: we are academics not politicians

Add comment
9 views
7 min read
Add comment
Home » Content » Catalan university Rectors against separatism: we are academics not politicians
Facebook Twitter Reddit Pinterest Email LinkedIN WhatsApp
Rectors of the most important universities in Catalonia have begun to show their tiredness of pro-independentism, Arboix and Elías publicly confronted separatist leaders for the first time. The rector of the Autonomous University of Barcelona (UAB), Margarita Arboix, denounces pressures from secessionism - "Torrent called us to support him and we said no," she reveals - and vindicates the ideological plurality of the campuses. Her counterpart at the University of Barcelona (UB), Joan Elías, defends her "total independence from political currents" and warns that "if we lose our freedom, we close the universities and single-mind becomes the rule." Paluzie from Assemblea Nacional Catalana singled out these two rectors urging that the UB become one of the main places of protest for the Day of Catalonia, la Diada , on the 11th “At the time when it was most necessary, the two largest Catalan universities, the UB and the UAB, are in the hands of unionist rectorships. We don't have to allow it, ”she urged. Her words have sparked an academic rebellion.

Those responsible for the two most important universities in Catalonia have begun to show their tiredness of pro-independentism. The rector of the Autonomous University of Barcelona (UAB), Margarita Arboix, denounces pressures from secessionism – “Torrent called us to support him and we said no,” she reveals – and vindicates the ideological plurality of the campuses. Her counterpart at the University of Barcelona (UB), Joan Elías, defends her “total independence from political currents” and warns that “if we lose our freedom, we close the universities and single-mind becomes the rule.”

Arboix and Elías publicly confront separatist leaders for the first time. They do so after the call made a few days ago by the president of the Catalan National Assembly (ANC), Elisenda Paluzie, urging that the UB become one of the main places of protest for the Day of Catalonia, the Diada, on the 11th.

Paluzie, who encourages boycotting the same campus where she works as a civil servant – she obtained a position as a professor a few months ago – has also singled out these two rectors. “At the time when it was most necessary, the two largest Catalan universities, the UB and the UAB, are in the hands of unionist rectorships. We don’t have to allow it, ”she urged.

Her words have sparked an academic rebellion. “The ANC should surround the Palau de la Generalitat, because it is the one who under-finances the universities,” Elías responded to Paluzie on Tuesday in the radiobroadcast of Ser. “I am neither a Spanishist nor an independentist,” Arboix revolts. In a conversation with EL MUNDO, both frame this call within a campaign to influence the elections to the Rector’s Office that are held in another year at the UB and the UAB. “They exercise pressure to be in academic government teams,” says Arboix, who will leave office in November and will not run again. «Surely a candidate will come out. Any active professor can be. We will debate, it is the democratic game », challenges Elías, who will attend.

The independentists also want to heat up the atmosphere for the trial against the Electoral Syndicate of 1-O, which will be November. Paluzie has expressly reproached the UB and the UAB for their “lack of support” for the accused members of the Syndicate, some of whom teach on these campuses.

All these signs lead us to think that the pro-independence movement will take advantage of it to return at the beginning of the university course and coinciding with the first anniversary of the strikes and revolts in response to the judgment of the procés. Despite the fact that meetings of more than 10 people are prohibited because of Covid-19, the Generalitat has given the go-ahead to the 9/11 concentrations. The ANC will mobilize 48,000 people in 107 demonstrations that will take place simultaneously in 82 Catalan municipalities. One of them, next to the UB.

«I know that they have requested government authorization because they want to gather between 800 and 1,000 people in the University Square. Let them do what they want, it is up to them. It’s their problem”, says Elías.

Arboix says that it is not the first time that she has received pressure: «The president of the Parliament has called us asking us at a certain moment to make a statement of support and we answered “no”, that he could not ask us for something that Parliament had not approved in its entirety. We told Roger Torrent that, as in his Chamber, on our campuses there are all kinds of ideologies.

And she adds: “There are people of all ideologies here. University means knowledge, openness, information, freedom. My government team has tried to be fair and respect both those who think in one way and another.

Elías expresses himself along the same lines: «Our field is academic, not political. In my rectorial team there are independentists, non-independentists, believers, non-believers … And what matters to me is that they believe in the project of making the UB the first university in the State and one of the most important in Europe.

He emphasizes the “public service” purpose of the institution he directs: “Our vocation is to create free, critical and committed citizens with society, train the young generations and attract science.” “If we lose the freedom to say things, we close the universities and single-mind becomes the rule. This is a space for dialogue, “he warns the pro-independence movement.

And he insists that “the rector cannot lean towards a political line.” «I am not a member of any party. I have opinions about independence, the Crown or the Republic, but it is my criteria as a citizen. When I represent an institution, I don’t opt ​​for anything ».

THE MANIFESTO OF THE CLOISTERS

Both Arboix and Elías had until now remained in a position that many voices see as “equidistance.” Last October, after the sentence of 1-O, they received criticism from the constitutionalism for allowing the cloisters of their campuses to approve a manifesto calling for the freedom of the prisoners and the right to self-determination. Arboix says he had a “very bad time.” «I suffered a lot. I did not agree and did not vote in favor, but the cloister is sovereign. People don’t understand it. He asks himself: how is it possible? It is possible for the majority. It is the same that has happened in the Barcelona Chamber of Commerce», he indicates.

Elías recalls that this manifesto, which had almost the same wording in all the universities, came from a group of professors and “was approved by secret ballot, so that it would not be known what each one voted for.” «It went ahead given the composition of the cloister. I could not refuse because the Statutes say that if 50 members want a new item on the agenda, they can do it.

But all the rectors of the Catalan public universities – grouped in the Acup – also signed another manifesto in which they expressed their “indignation” after the sentence and showed their “concern” for the situation of the convicted. Neutrality? Elías responds that it was a “joint statement” that arose as a result of a “very complicated transaction to manage” and says that “only” he is responsible for “what was signed as sole author.”

The UAB also signed this manifesto, and a year earlier it prevented young people from the Catalan Civil Society from registering in the registry of associations, in what was defined by the Justice as a “violation of the rights” of students. “I have tried to solve it the best I could and many times I have been wrong,” makes self-criticism Arboix.

One of the boys from that constitutionalist group, the law student and vice president of S’ha Acabat! Àlex Serra, denounced in July a UAB teacher who in his classes said that Spain was “a fascist state.” Arboix takes a step forward and announces that she is going to open a file with the professor: “He did not respected freedom at all and has not guaranteed the university as a space for dialogue and transmission of cultures where we all fit.”

The fire of division: nationalisms in Spain