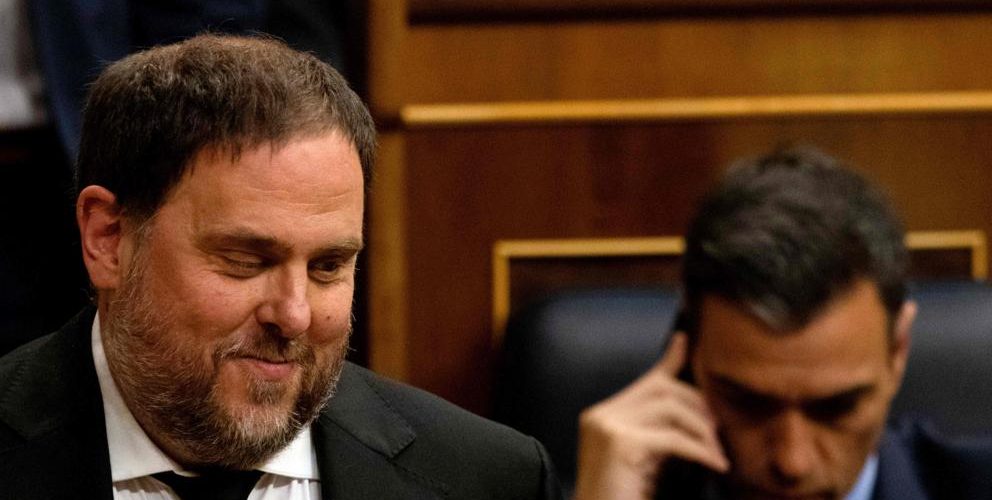 Add comment
5 views
4 min read
Add comment
Home » Content » Amnesty, pardon and sedition
Facebook Twitter Reddit Pinterest Email LinkedIN WhatsApp
The debate about the situation of independentists leaders in prison or in exile is recurrent. On the table, there are three solutions: amnesty, pardon and reform of the Penal Code. In an article published in these pages last Friday, the ERC general secretary, Marta Rovira, and the spokesperson in the Parliament, Josep Maria Jové, presented their position.

The ERC leader, Oriol Junqueras, in the Congress of Deputies. (PABLO BLAZQUEZ / AFP)

The debate about the situation of independentists leaders in prison or in exile is recurrent. On the table, there are three solutions: amnesty, pardon and reform of the Penal Code. In an article published in these pages last Friday, the ERC general secretary, Marta Rovira, and the spokesperson in the Parliament, Josep Maria Jové, presented their position.

From their point of view, amnesty is the only viable and legitimate way. It allows “a return to dialogue on equal terms” and does not “depend on the courts” but “exclusively on the political will”. On the contrary, the penal reform requires “very large and impossible majorities in Congress” and “the approval of a Constitutional Court that could extend the process for years.” You do not have to be a legal expert to appreciate that the argument does not conform to reality. To begin with, there is a starting error in this binary description. The three proposals are legitimate and not exclusive. In reality, they have different nature, effects and routes. Each of them has its advantages and disadvantages.

It is not the first time that, from the Republican ranks, the debate has blurred. First, they presented the pardon as an unacceptable option because it forced the beneficiaries to repent and ask for forgiveness when the law does not say anything about it. The pardon is a valid tool for the Executive to correct injustices perpetrated in the courts. Later, they demanded the State Government to give orders to the Prosecutor’s Office when the separation of powers prohibits it. Now, they redraw a biased diagnosis. The constitutionality of the amnesty is a controversial fact, but nobody doubts that the last word, unlike the reform of sedition, is from the Constitutional Court.

Nor is the argument of an unviable penal reform acceptable. The vote of the majority of the investiture and of the pro-independence parties add sufficient support. On the other hand, the amnesty law does have an unfavorable balance of forces. The PSOE has firmly opposed and the current conservative composition of the Constitutional makes its “go-ahead” unimaginable, given the Constitution’s prohibition of general pardons. In addition, amnesty in the past has been a useful tool to turn the page but in contexts of great historical consensus now distant.

Displaced on this plane, the discussion takes on another force. Political action that relies on major milestones, all or nothing, can be very attractive but often ends in frustration. Working in long-term scenarios is not incompatible with working in the short term. Seen from this perspective, Rovira and Jové’s contempt for pragmatic solutions is surprising. To describe the penal reform as “little less than offensive” is reckless when it is a demand, not only of the Comuns, but also of the unions, the Síndic de Greuges or human rights entities such as Amnesty International. The reform aims at two objectives. One, the freedom of prisoners and exiles. Two, shield the right to protest, whoever exercises it: independentists but also trade unionists, environmentalists or PAH activists.

The terms in which a problem is defined are part of its solution. For this reason, criticism of the adversaries’ proposals does not exempt from equanimity and intellectual rigor. On the contrary, Republicans would have to avoid paralyzing hypercriticalism in the face of reforms that may bring more utopian milestones closer. We cannot wait for an unlikely amnesty to begin to de-judicialize the conflict. To gather complicities along the way, it is also useful to practice solidarity claimed by oneself. The repression does not begin with the independence movement. In fact, his proposal does not foresee anything about other persecuted as the indignant of 15-M sentenced by the acts of the Parliament. It cannot be forgotten that only ICV and the CUP opposed it. Instead, ERC facilitated that Marchena accepted the appeal of the Parliament against his acquittal. To be credible, another incongruity to review is the attitude of the Generalitat towards the pro-independence protesters accused of riots. It is dishonest to claim amnesty for those who ask for prison sentences in court.

Be that as it may, Rovira and Jové are right on one point. Any proposal to unblock the conflict goes through its dejudicialization. An agreement without a solution for the retaliated is not viable It will not be easy. Many obstacles will have to be overcome but everyone, and each one from their position, will have to strive to find it.

The fire of division: nationalisms in Spain